So I’ve been doing The Sugar Free Challenge for a few days now. I’ve been really dedicated and have only been eating sugar in the form of fruit, but my body doesn’t like it one bit. I had the initial sugar withdrawal headaches, which I was expecting. I know those are normal and I was prepared. But the scary stuff came this morning, when I woke up craving sugar and got really shaky, lightheaded, and felt like I was going to pass out.

I decided I have to tweak things. I was trying to limit my sugar completely (other than fruit) but I think I have be more realistic. I’m viewing this more as a lifestyle change rather than a ten day challenge, so I’m going to have some sugar every now and then and not deprive myself. At first I was a little bummed that I couldn’t last the full ten days, but I know I have to listen to my body.

So when I told Mark about my change of plans, he decided to surprise me. Haha, just wait until you see what’s coming…

We were just going to run out to do some errands, but then he got on the beltway and headed towards downtown (DC). I asked him where we were going and he told me to just relax and roll with it. I’m so Type A and need to have everything planned out, so that was asking a lot:) Before I knew it, we were in Georgetown and walking in here:

This is based off the original Serendipity in NYC. They are famous for their Frozen Hot Chocolate. They also have a $1000 Golden Opulence Sundae that is made with edible gold and requires a 48 hour advance reservation. Crazy!!

What a way to break my no sugar rule huh? We were already there so I couldn’t say no. We had talked about going for over a year now, so I had to give in and try it. Don’t judge me, you know you would too:)

We got lunch first. I dined on a delicious (and healthy) veggie burger with out of this world sweet potato fries. I can’t even begin to tell you how good these were. I had to force myself to save half of it to take home with me. Mark got a burger and regular fries, but they were seasoned deliciously and I had to steal a couple. 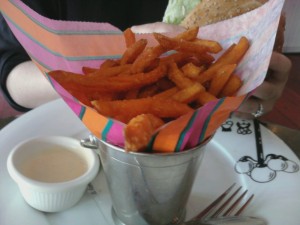 Next came the part we had been waiting for. Dessert.

I already had it in my head that I was going to get a Frozen Hot Chocolate, but I asked the waitress what she recommended. One of her picks was the Forbidden Broadway Sundae, which had ice cream, hot fudge, a chocolaty sponge cake, and whipped cream. I told Mark to choose and we would share. Well….he decided it would be a great idea to get two desserts! About five minutes later we watched with our eyes bugged out of our heads as she brought both a Forbidden Broadway Sundae and an Oreo Frozen Hot Chocolate to the table. Just to give you an idea how big these suckers were, a lady that was walking past our table stopped in her tracks and exclaimed, “Oh my, those are huge!!!!!” 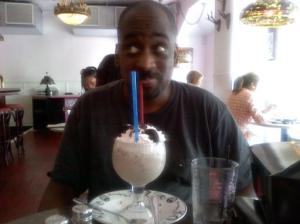 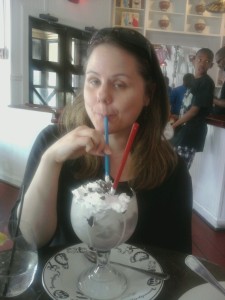 But oh so good.

We were only able to take a few bites/sips from each before we had to push the plates away. It was just too much. I liked the Forbidden Broadway Sundae better. The Frozen Hot Chocolate was good, but we got the oreo one, which I think was made with vanilla and white chocolate. I’m a dark chocolate girl so maybe I would have liked it better that way.

So now I’ve had my sugar fill for the week. I wasn’t really prepared to go this overboard, but I figure I have to treat myself every now and then. Plus it’s been a while that Mark and I have treated ourselves to a nice weekend outing. I’ve been really good the past four months staying dedicated to eating sensibly, so I’m giving myself a pass this time.

Now if you’ll excuse me, I need to go run off all this sugar!