The morning of the race, my stomach was full of butterflies. I woke up around 3:30am and took a deep breath. I just reminded myself that I could do this and in less than eight hours, I would be a half marathon finisher. I just needed to focus, do my best, and enjoy the experience. I ate the little breakfast that I was able to stomach and got dressed.

The race started at 7am in Frederick, Maryland, which is about 25 miles from my house, so I promptly headed out the door at 5am. I wanted to have plenty of time before the race to park, use the bathroom, stretch, and “get in the zone” beforehand.

Once we got about a mile from the Frederick fairgrounds, the site of the race, traffic came to a standstill. Turns out there was traffic coming from three or four different routes, and the police had to direct traffic. By the time we parked, it was 6:30am. Not good. I quickly got myself together and headed straight to the bathrooms.

Oh, the lines. The bathroom lines were so long. I wasn’t worried at first, thinking the lines would move quick since there were plenty available. Um, nope. Wrong. By the time I got to the front of the line, the National Anthem started. Eeek! I quickly darted in, did my business in lightening speed, and raced to the start line. I made it with about two minutes to spare.

See all those heavy layers that some of the runners removed before the race? Yeah, they were smart. I was freezing and decided to keep my sweatshirt on, which I would soon regret.

Before I knew it, we were off. It was a surreal moment. I couldn’t believe that I was about to embark on over thirteen miles on foot. This was something I’d never attempted before. I took a deep breath and told myself, “This is your dream. You got this.”

The course route took us all over Frederick. I visited Frederick often growing up, but I quickly realized there was so much of the city that was new to me. The course was beautiful. The charming downtown shops, the beautiful Baker Park, and the cute neighborhoods were great highlights.

What really made the course so great were the volunteers, law enforcement, and the community residents. Everyone worked so hard to support the runners. It felt so good. I couldn’t believe how many people were out cheering the runners on and doing what they could to help each one of us achieve our goal. A huge thank you to each one of you.

The first three miles flew by. I couldn’t believe that the first 5k felt so easy. I was still sticking with my run/walk method. I was running three minutes and walking one minute. It was working. The only problem was that I was hot with my sweatshirt on, but didn’t want to toss it. I’m so thankful for my mom who met me around mile four. I could finally run in just my short sleeved shirt and felt so much better. Lesson learned.

By the time I got to mile seven, I was in pain. My feet were hurting, but I kept moving along. I noticed that it often felt better to run rather than walk. Walking was more painful.

Around mile eight, something happened that I never experienced before. I started feeling muscle spasms in my left leg. It started out in my ankle, and I immediately had to stop running and start walking. I was drinking water and Gatorade at almost every water stop, but I think I was dehydrated (I missed the food that I was counting on at one of the water stops). As soon as I started walking, the spasms would subside. I tested running again and about a minute into it, the spasms would return. I realized at this moment that I would probably have to walk the remainder of the race. 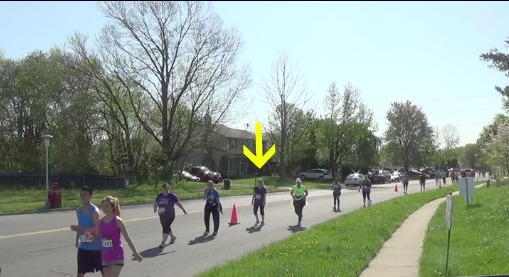 When I reached the ten mile mark, I thought that there might still be a chance that I could finish under three hours. That idea quickly vanished when the muscle spasms started in my calf as well. I knew at that moment that I would be walking to the finish line, and I was a little disappointed. I’m not sure why since all along I knew that my goal was to finish. Plain and simple. I gave myself a quick pep talk, and the disappointment faded. I knew that I was only a 5k away from the finish line and this was well within reach.

I approached the fairgrounds where the finish line was waiting. I saw the 13 mile marker and I was flooded with relief. I realized at that moment that I was going to get my medal.

The last mile was around the fairground track, and I started to run. The cramping started up again, so I walked a little and ran a little. Finally, the finish line was right there. Although my legs were still cramping, I took ten seconds to grin and bear it. I was determined to run across that finish line. 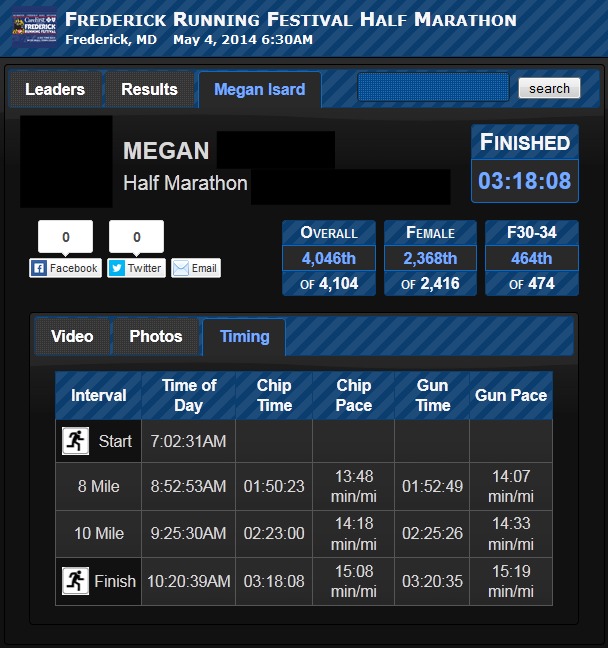